Who Is Father McKenna? 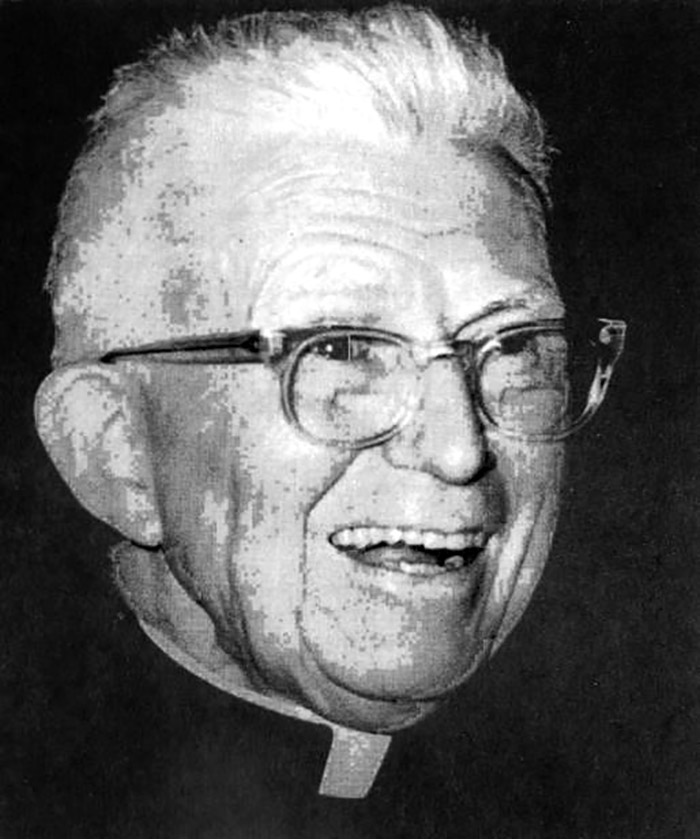 Father Horace B. McKenna, SJ, was known as Washington’s “priest to the poor.” He was a tireless worker for the rights and dignity of people in need, especially people of color. During his two assignments in Washington, DC (1953-1958 and 1964-1982) he was well known for advocating for the poor and working to meet their immediate needs. Fr. McKenna used to say that his role was to “hang on to people until help came.” One of his neighbors recalls, “Around Christmas and Thanksgiving he always sent us a basket of food; I wouldn’t have to ask for it because he knew I had a houseful of kids. He would always have those Gonzaga boys knock on my door and give us some food. In fact, he didn’t ask anybody; he just knocked and delivered until the food ran out. That’s the kind of man he was. He didn’t ask whether you needed it or not; he just gave it to you. He’d give you the shirt off his back.”

Born on January 2, 1899 in New York City as one of 12 children, Horace McKenna was educated at Fordham Preparatory School. He entered the Society of Jesus at St. Andrew-on-the-Hudson on July 30, 1916. While teaching at a Jesuit school in Manila, Philippines, he discovered the desperate needs of the poor and oppressed.

He was ordained June 23, 1929 and requested an assignment to parishes in Southern Maryland amidst poverty and segregation including St. Peter Claver’s Church, St. James’ Church, St. Ignatius’ Church, and St. Inigoes’. Here he began his ministry of healing and reconciliation. He sought to break down racial segregation and lift up the lives of African Americans in his community.

Fr. McKenna continued this work at St Aloysius in Washington, DC from 1953 to 1958. Then he spent six years at the Church of the Gesu in Philadelphia. In 1964, he returned to St. Aloysius where he remained until his death in 1982.

Fr. McKenna worked tirelessly throughout his time in Washington, DC for the rights of the poor. Many of the area’s organizations serving the disadvantaged have ties to him. He and his legacy touch thousands of lives in the DC region every year.

He founded SOME (So Others Might Eat), a soup kitchen, clinic, and jobs center, and co-founded Martha’s Table which serves low-income families in the lower Columbia Heights neighborhood. He was also instrumental in the development of Sursum Corda Cooperative, a low-income housing project in the block just north of St Aloysius Parish on North Capitol Street.

Fr. McKenna inspired many with his approach to all people as individuals, regardless of the circumstances in which he encountered them: ” I really believe that every person is a revelation of God – the joy of God, the love of God. I feel that the human person on the street is the appearance of Jesus Christ consumed with human needs. Christ is in the wretched person, as well as the young person, the young woman or the young child. Their smile is so fresh, like a bud or an open flower that speaks of the wealth of the plant beneath the surface. And that wealth is God. ”

In 1983, in honor of the legacy left by Fr. McKenna, St. Aloysius parish opened the Father McKenna Center in the basement of their church. His love for those in need is present and active today in the continuing mission and work of the Center that bears his name. We are blessed to have members of Fr. McKenna’s family serve with us regularly as volunteers, and to have members of our community who knew him personally.

It’s our privilege to bear the responsibility of his legacy, providing help and accompaniment to the poor of our community and men experiencing homelessness.

Words of Wisdom from Father McKenna

“I really believe that every person is a revelation of God – the joy of God, the love of God. I feel that the human person on the street is the appearance of Jesus Christ consumed with human needs. Christ is in the wretched person, as well as the young person, the young woman or the young child. Their smile is so fresh, like a bud or an open flower that speaks of the wealth of the plant beneath the surface. And that wealth is God. ”

“In the old days, we would go out in pairs and take care of the Widow Jones who had no bread or the Widow Smith whose rent was due. But now, the poor are a swarm all around us. We can’t go out to them. How could you go to sixty homes? How could you go everywhere at once? We have to be ready when they come to us.”

“The greatest undeveloped resource of our nation and of our world is the poor.”

“The poor can’t lift themselves up by their bootstraps because they have no boots.”